“Many people believe the BMW logo is a stylized propeller,” says Fred Jakobs of BMW Group Classic. “But the truth is a little different.”

So where does the propeller myth about the BMW logo come from?

When the name BMW was first included in the commercial register in July 1917, there was no company logo. Similarly, the first ad from the same month also lacked any BMW symbol or emblem.

Even today, many people still believe that the BMW logo depicts a rotating propeller. How come? The myth of the BMW propeller came about years after the first company logo. A BMW ad from 1929 showed an airplane with the BMW logo in the rotating propeller. At the beginning of the global economic crisis, the ad was trying to promote a new aircraft engine that BMW was building under license from Pratt & Whitney. The propeller interpretation fit very well into the advertising image of the young company, as it underlined the company’s roots and its expertise in aircraft construction. 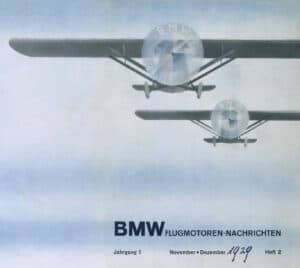 Since this BMW publication from 1929, the myth that the BMW logo is a propeller has endured.

So the story of the BMW logo is based on a legend – a legend that still lives on today. “For a long time, BMW made little effort to correct the myth that the BMW badge is a propeller,” explains Fred Jakobs of BMW Group Classic. So according to the expert, sticking to the story that the BMW emblem is a propeller would not be entirely wrong. It’s not strictly true that there is a propeller in BMW’s company logo, though. Constant repetition has made this explanation a self-propagating urban myth. “This interpretation has been commonplace for 90 years, so in the meantime it has acquired a certain justification,” Jakobs explains.

We use cookies to ensure that we give you the best experience on our website. If you continue to use this site we will assume that you are happy with it.OkNoPrivacy policy